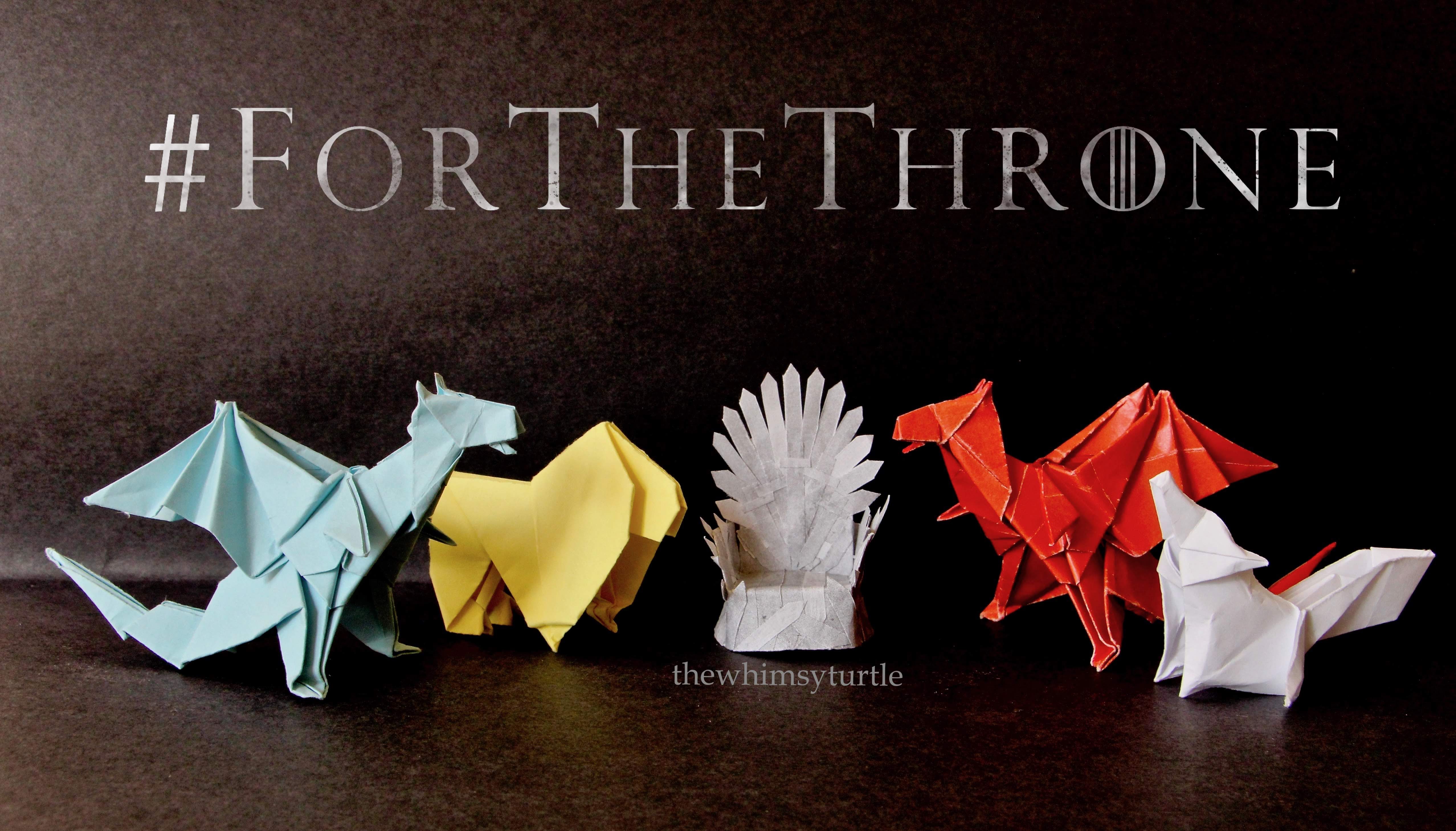 Fire and Noms. Kirby is Coming.

The dragons and wolves are the same patterns and papers as I used two years ago. 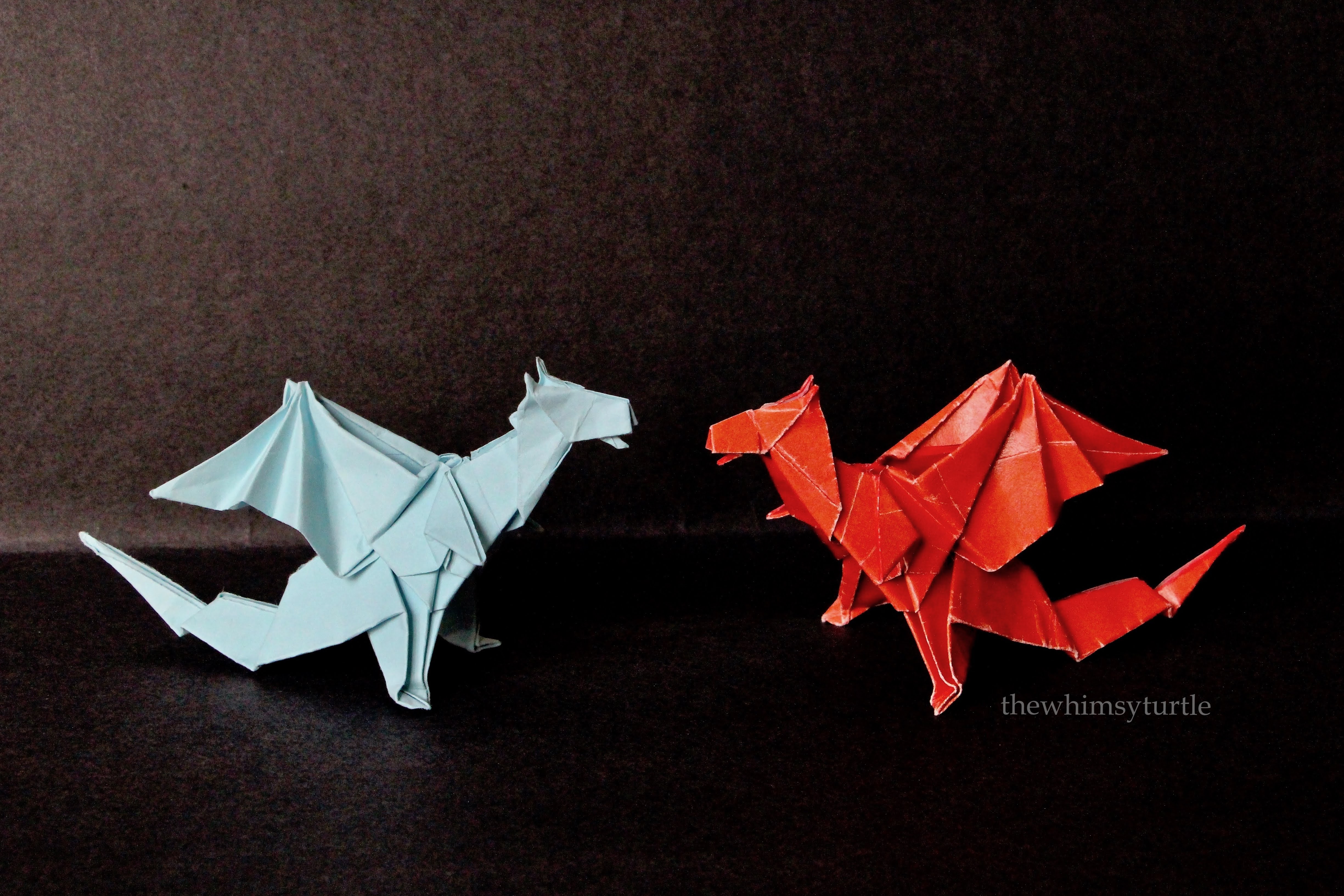 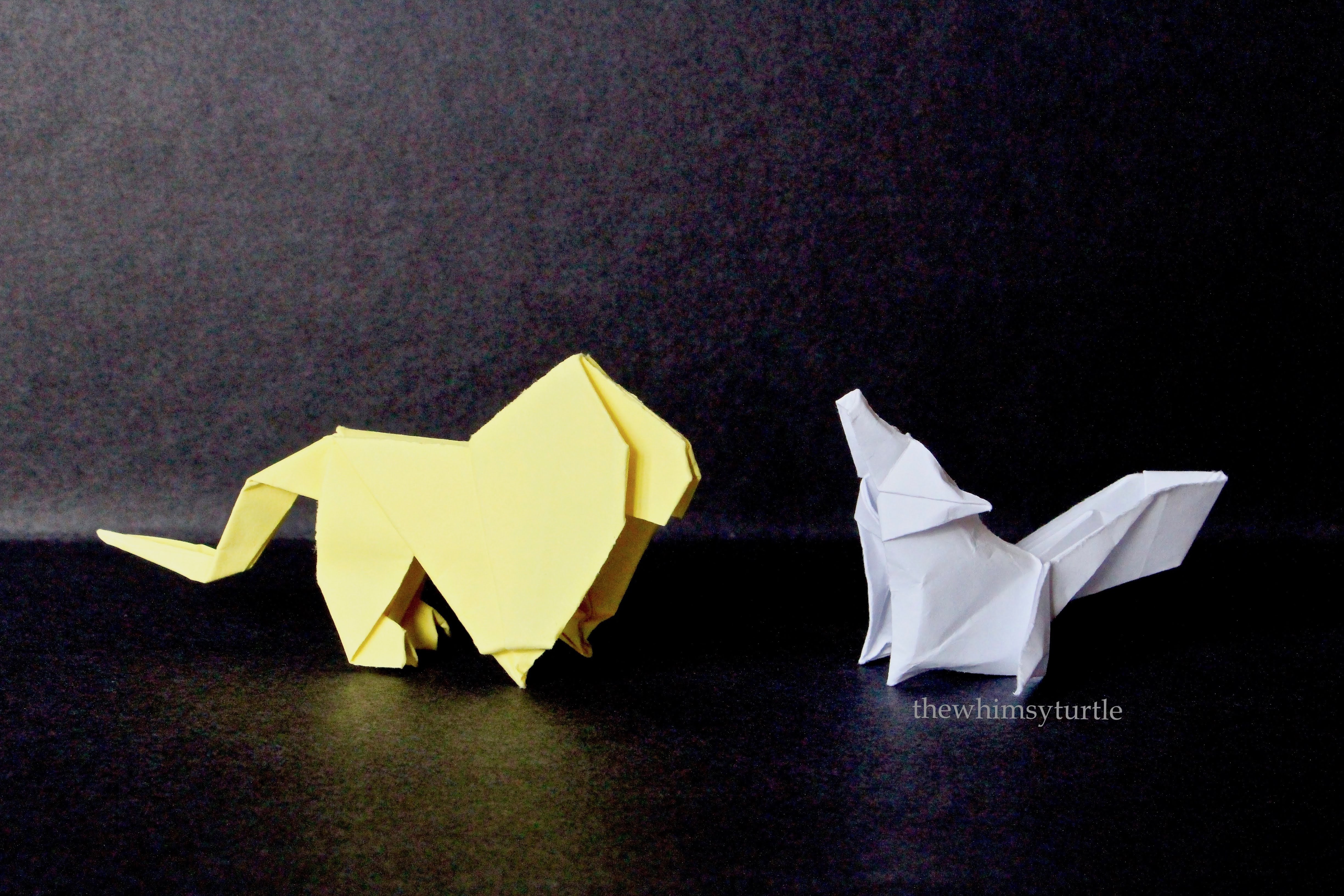 The Starks are coming for you, Cersei.

Unlike two years ago, I did not fiddle with my camera settings (I was rushed and frankly, I also forgot!), so there is more unsightly glare this time around. D: 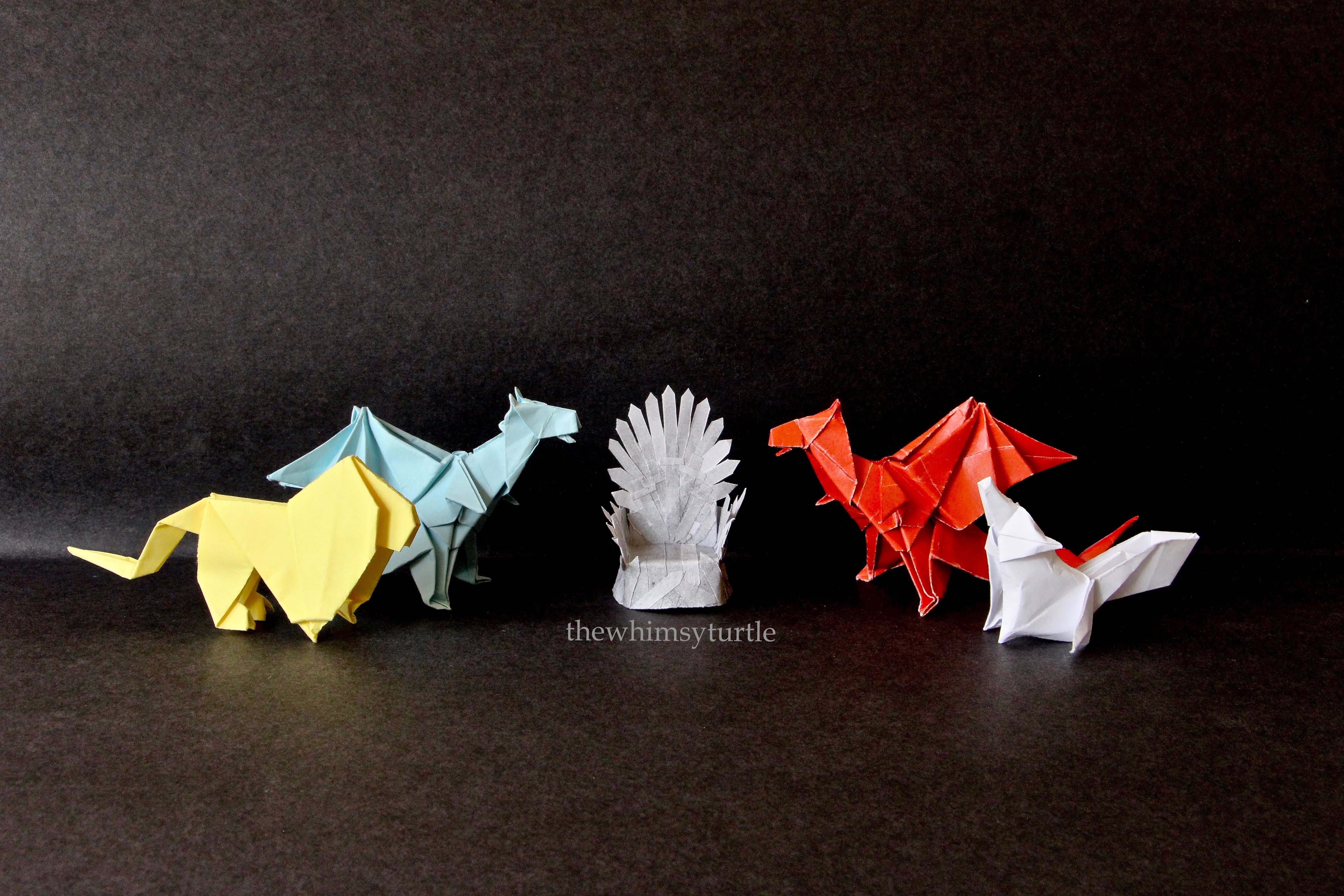 I spent way too much time on the #ForTheThrone text…There is a free Game of Thrones font widely available on the Interwebs, but it is free for only personal use. So I went through all the fonts in Microsoft Word to find a similar font. I settled on Perpetua Titling MT, except for the R’s that are in Old Goudy Style (which has more of a flourish to fit the official font). I hand drew in the vertical lines in the second O, and friend qvoro added dramatic texturing in Photoshop (since I don’t have Photoshop). (I realized after the fact that the official font is actually 3D and shiny metal, instead of the textured look I was going for. Oops. This uh, has more character? And actually kind of fits better with the origami?) 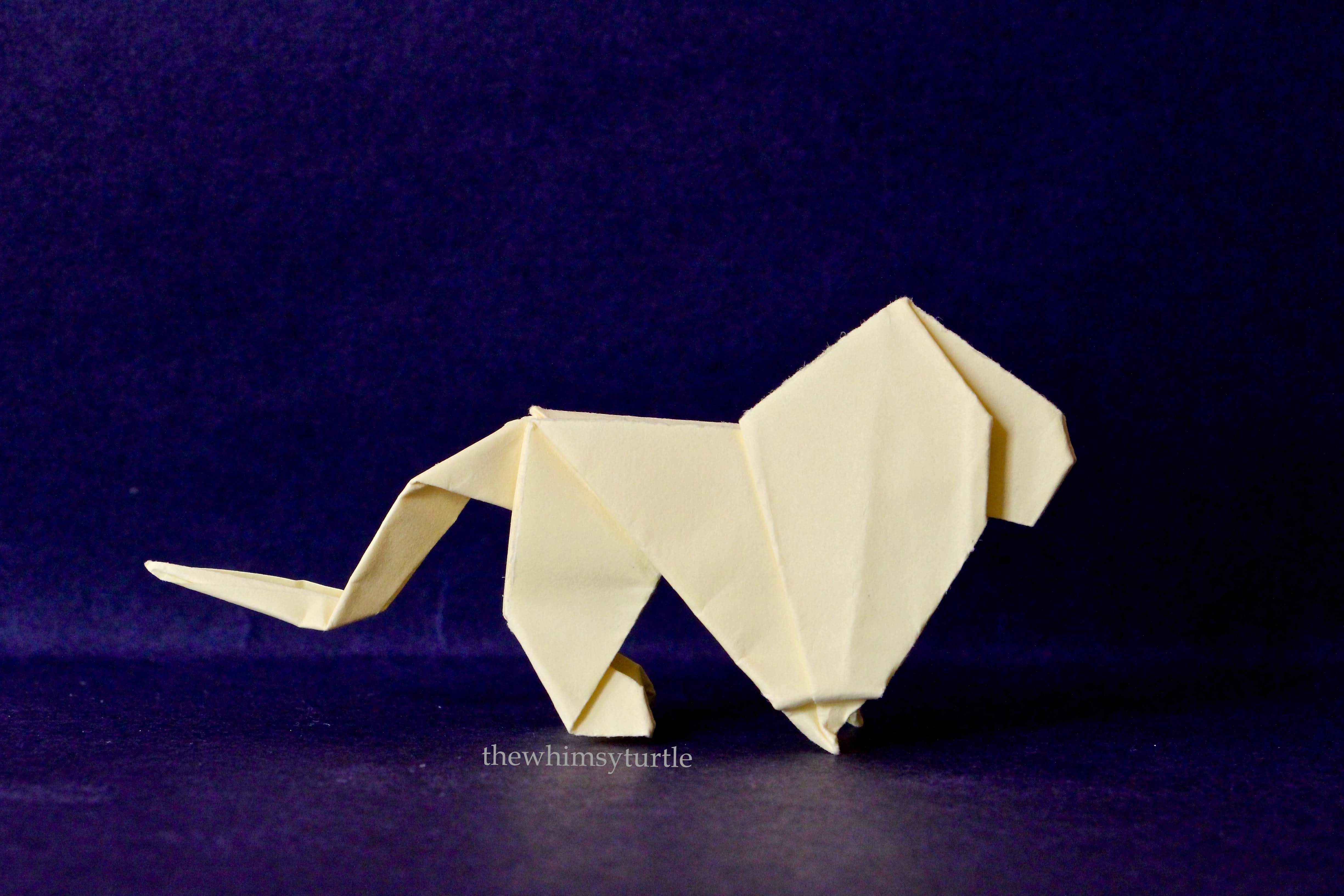 This is more like how yellow the lion is in real life!

I initially tried to fold Robert Lang’s design, following Jo Nakashima’s video instructions. That lion design fits better aesthetically with the dragons and wolf. However, the regular printing paper proved to just be too thick to fold that model properly, especially the tail. 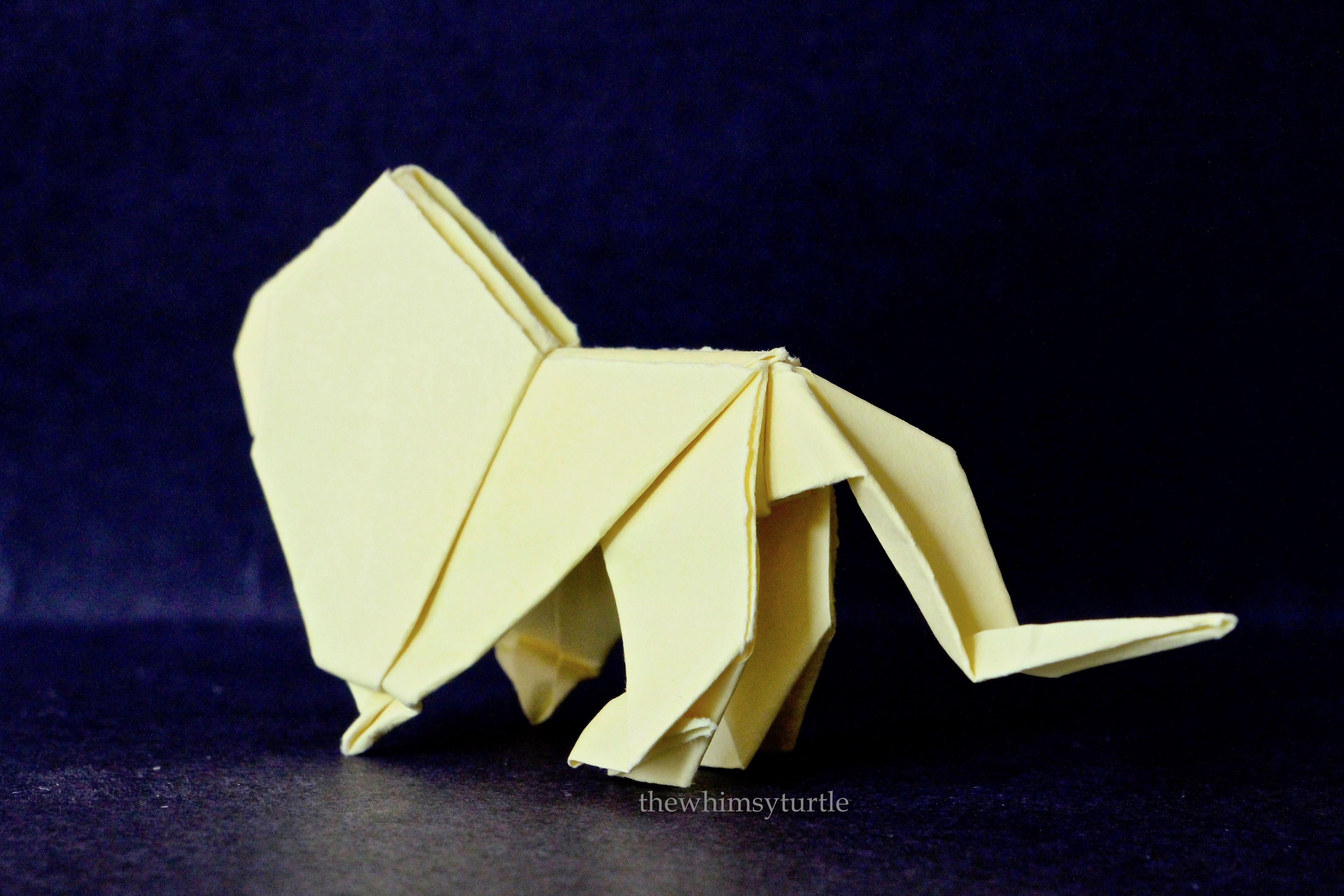 So instead I settled for this simpler lion design. Even this one proved to have some issues with the thick regular printing paper: The fold down the middle of the back is through several layers of paper, so the model very much wants to open up and go sploot. In these photos, there is some tape helping the model stay closed and standing upright. The tape by itself isn’t strong enough to overcome the paper’s tendency to open up, so I also had the lion squashed under a heavy object for something like 18 hours up to these photos. 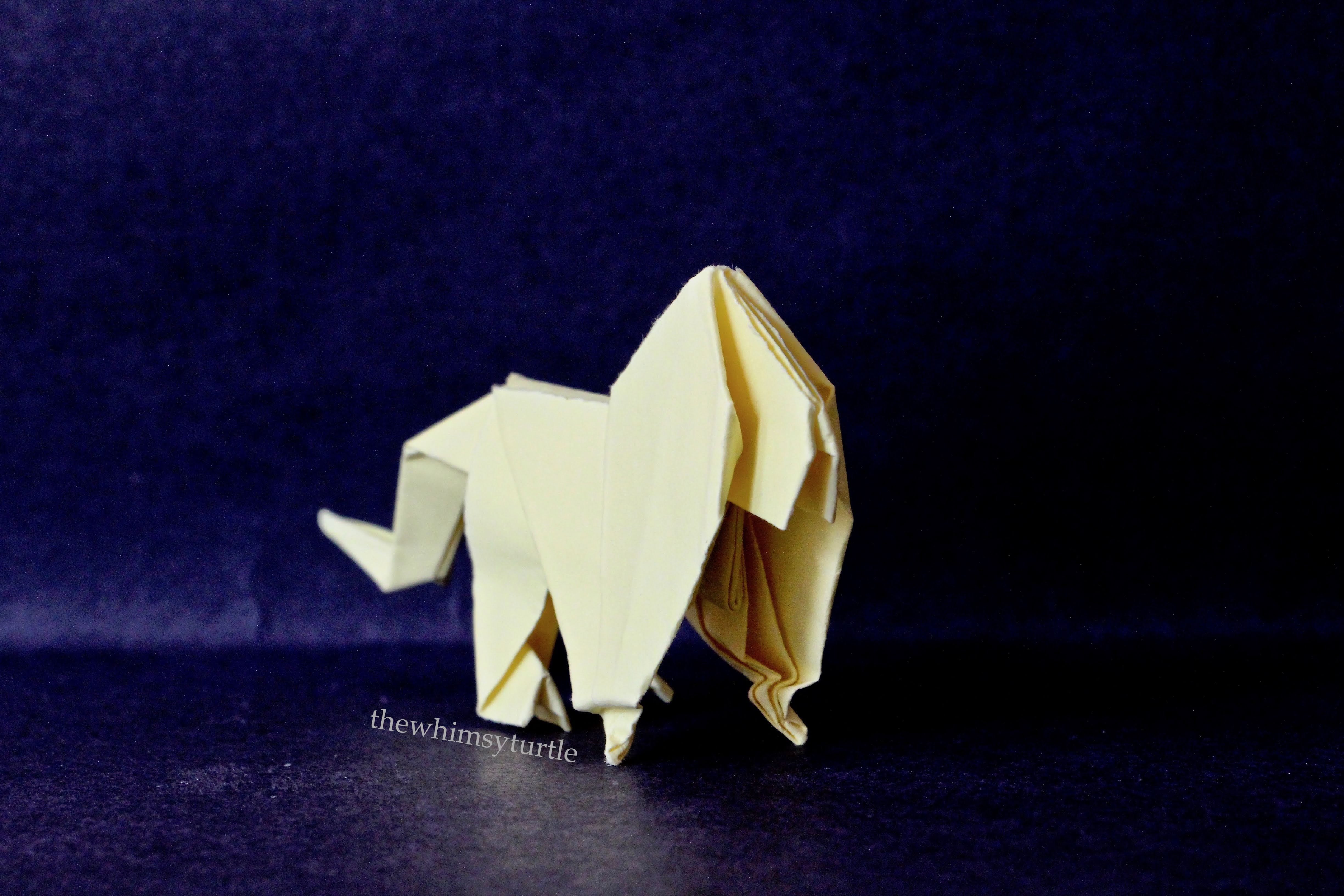 I was worried this origami lion design would look too flat next to the dragons and wolf, but the lion turned out better than I had expected! 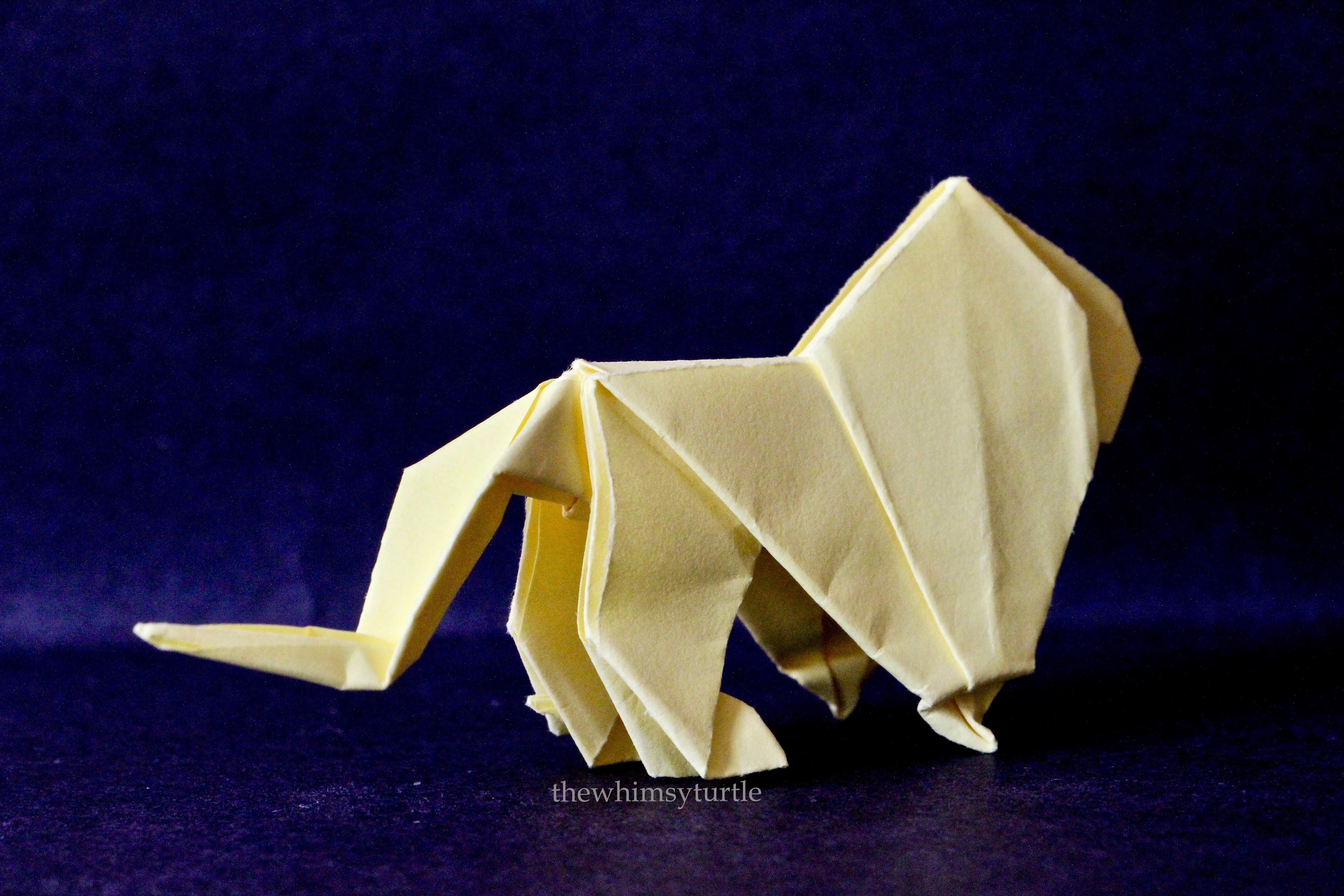 How dare you even speak to me, much less insult my gloriousness?!

The most recognizable prop from the TV show: The Iron Throne! 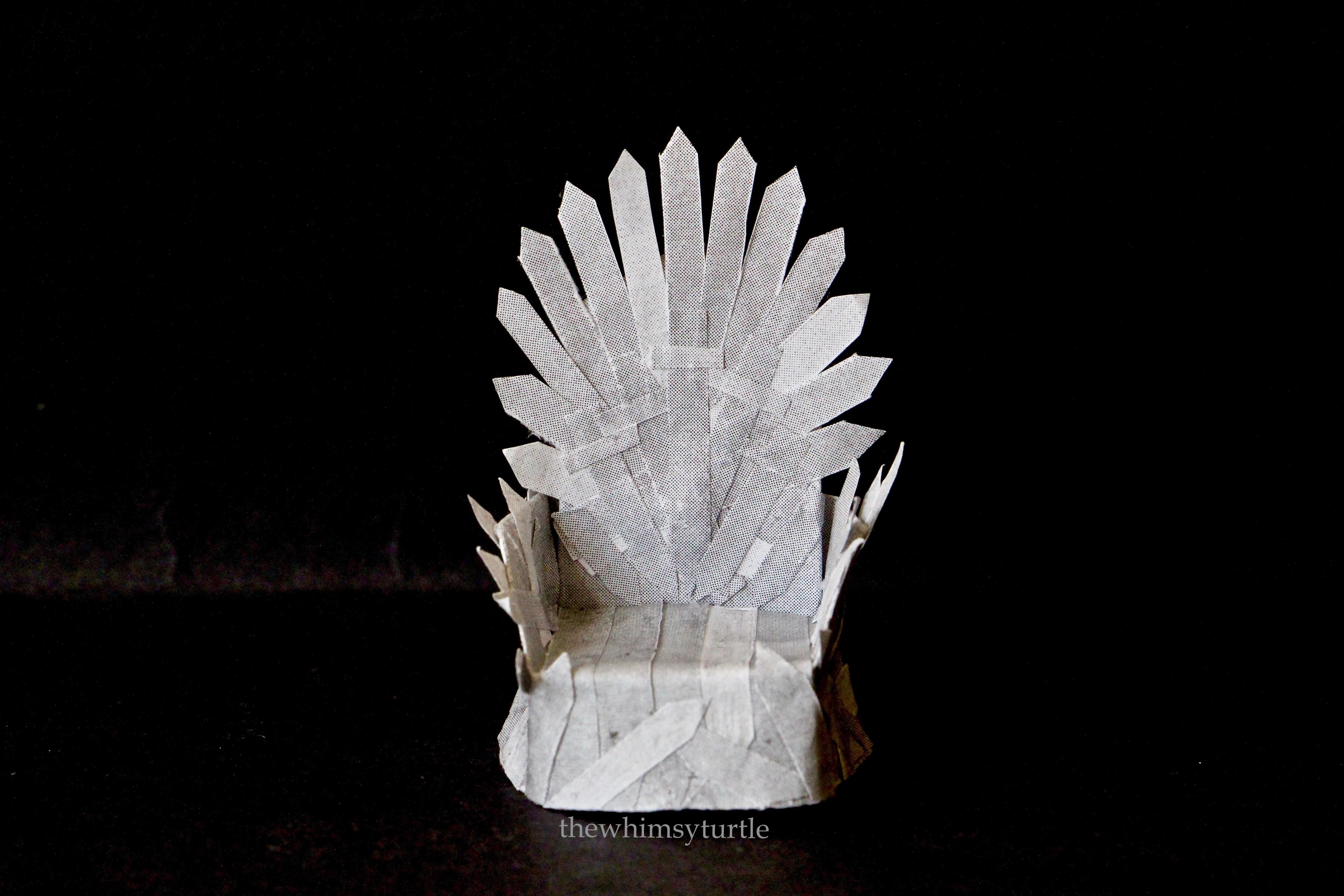 Pattern: Royal Arm Chair by Paper Folds – Origami & Crafts on YouTube, video instructions here
Paper: Regular printing paper with gray printed all over, slightly under 4.25″ square (the printer could not print all the way to the very edge of the paper) 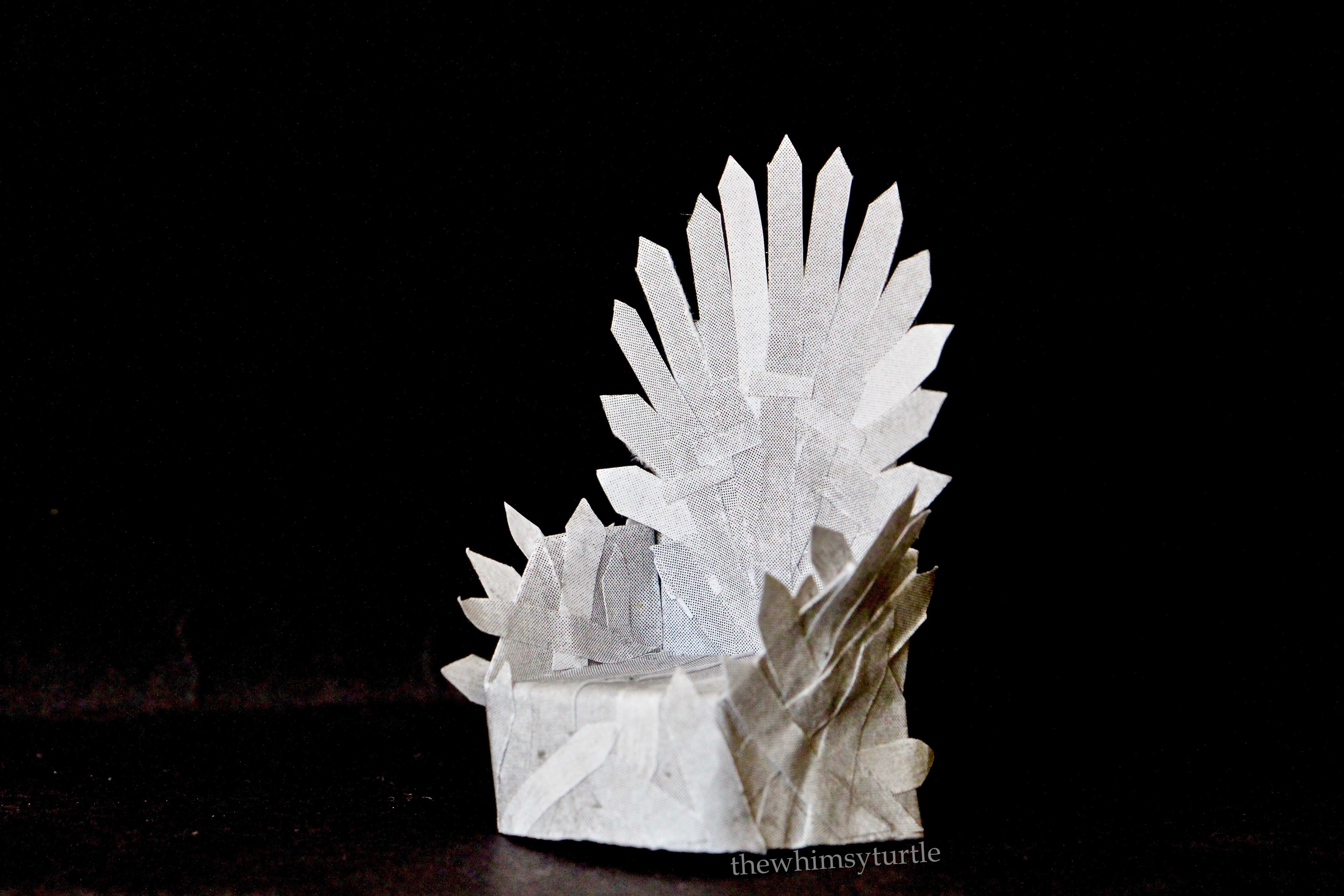 Much lighter than the TV show prop.

I started out with a throne-like origami chair and folded back the top corners on the seat back to create a kind of arch. I also flared out the sides to be more like the Iron Throne in the TV show. 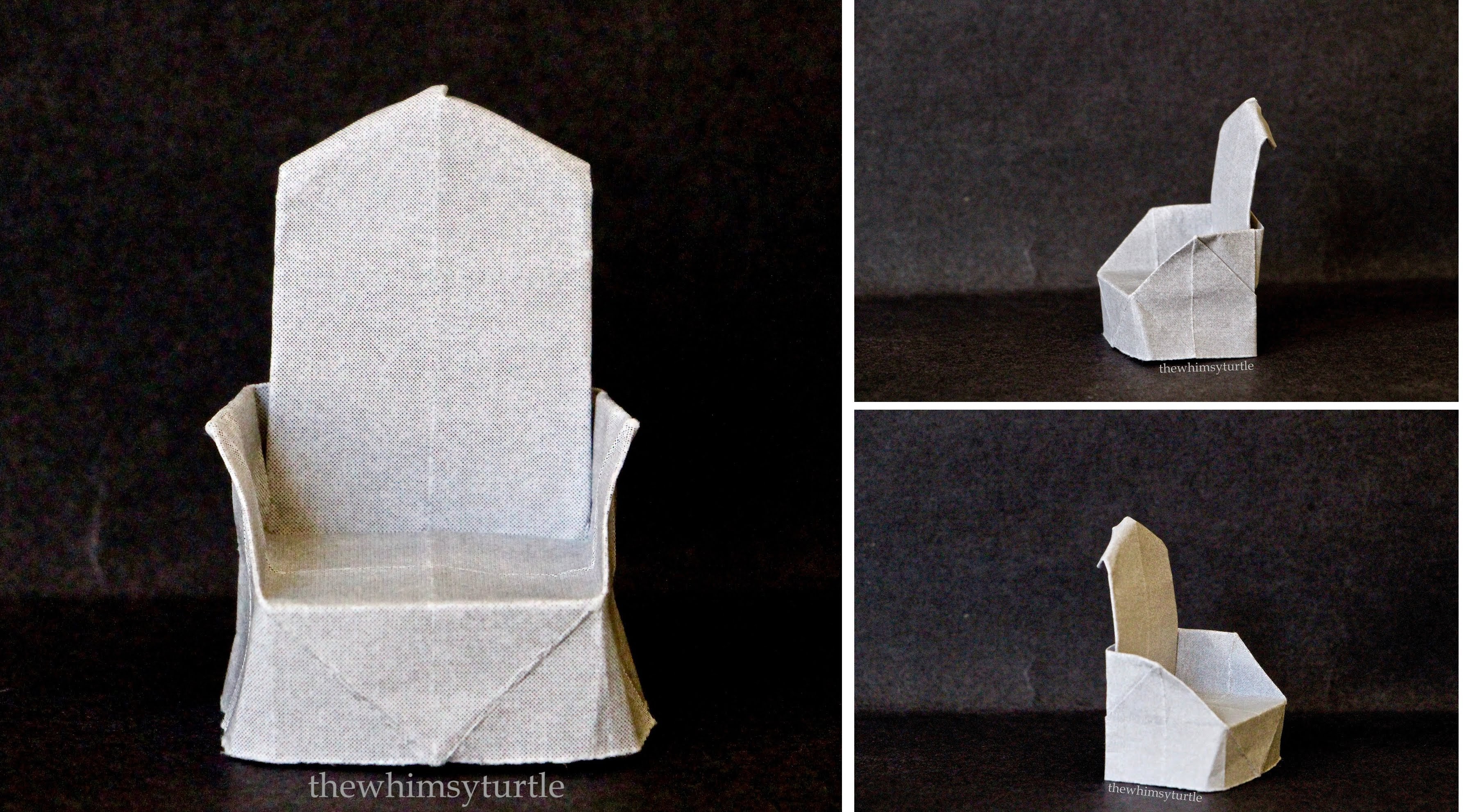 Then it was time to cut out and glue on the all-important swords! 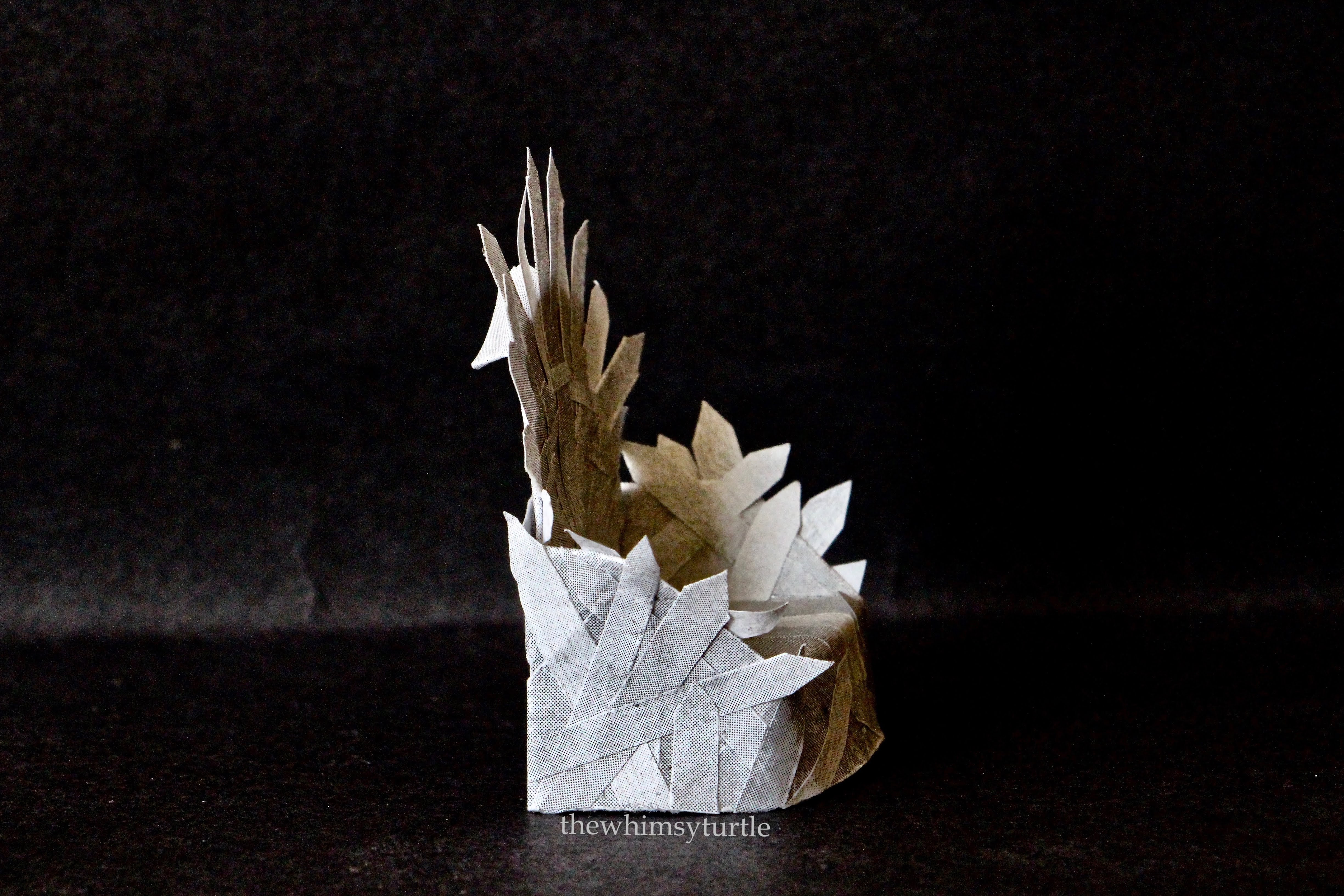 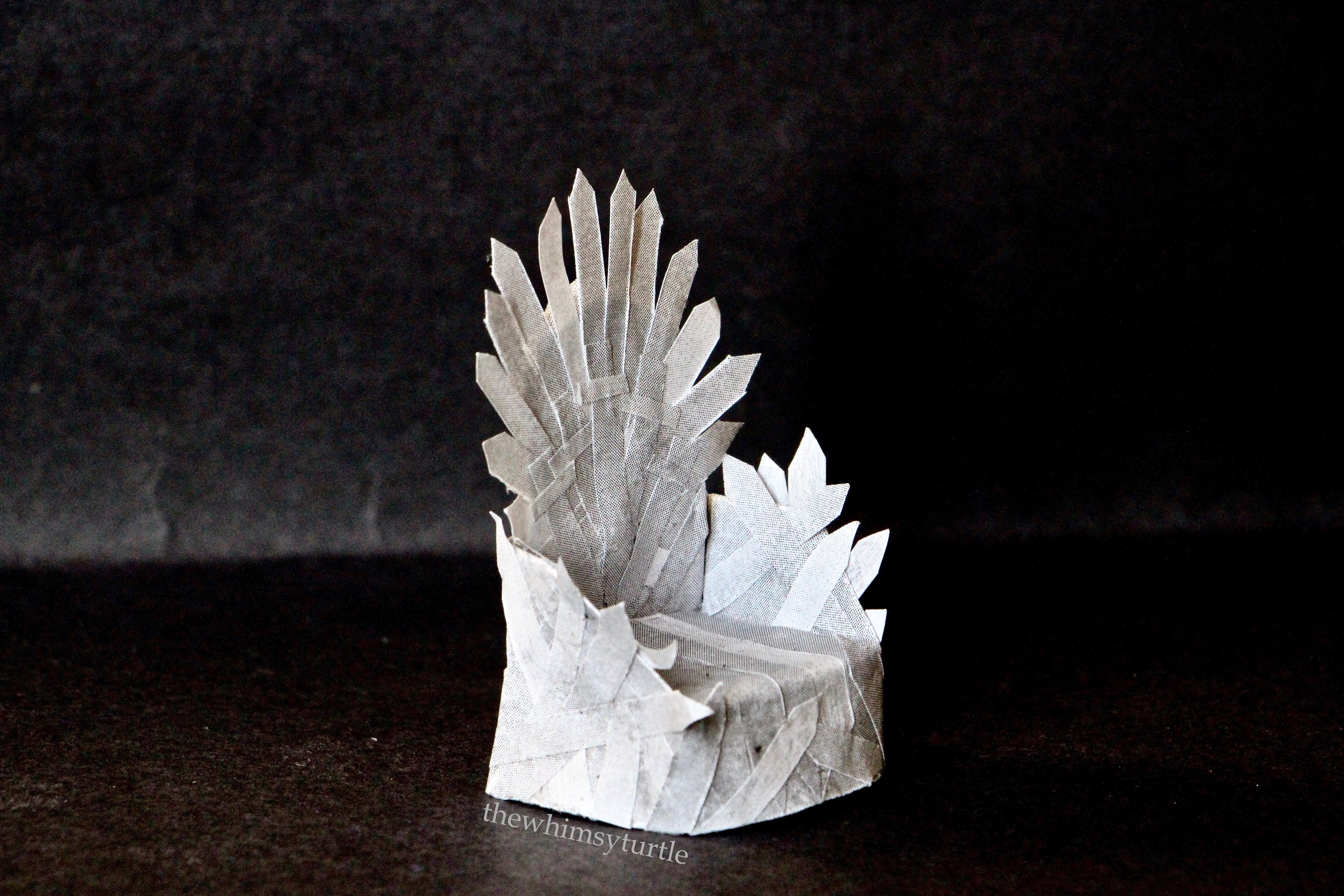 To add more variation and definition, I used two different grays for the “swords”: the same darker gray as the chair base and a few swords in a lighter gray. In retrospect, I should have used an even darker gray and outlined the swords a bit. They still kind of all blend together, especially the hilts on the ones pointing downwards on the seat back. 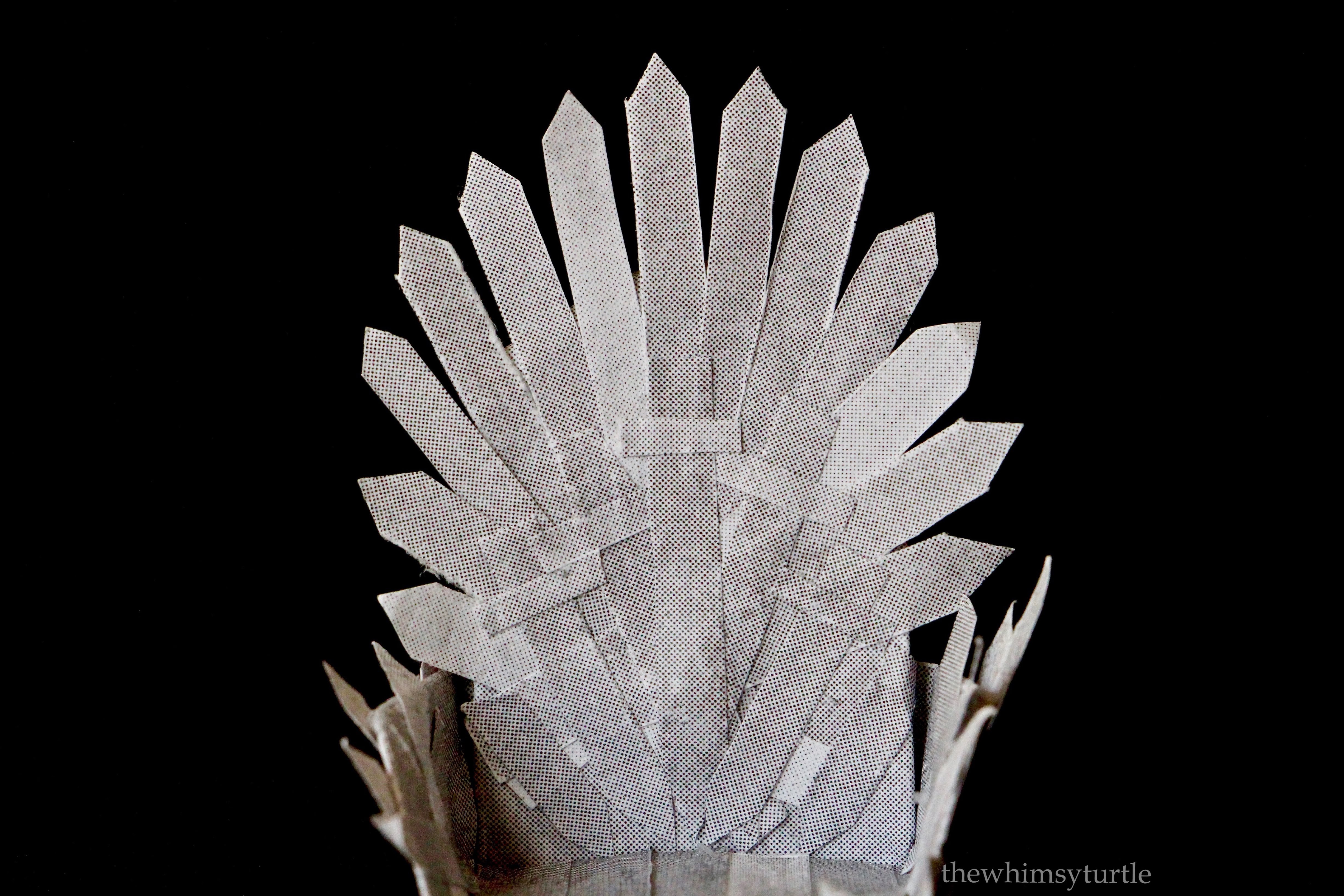 The hilts are there!

The gray is printed on only one side of the paper. So for the swords on the sides of the throne, I lightly colored the flip side with pencil for the ones that stick out. I didn’t bother shading the backs of the swords sticking out of the seat back, but now I’m thinking I should! 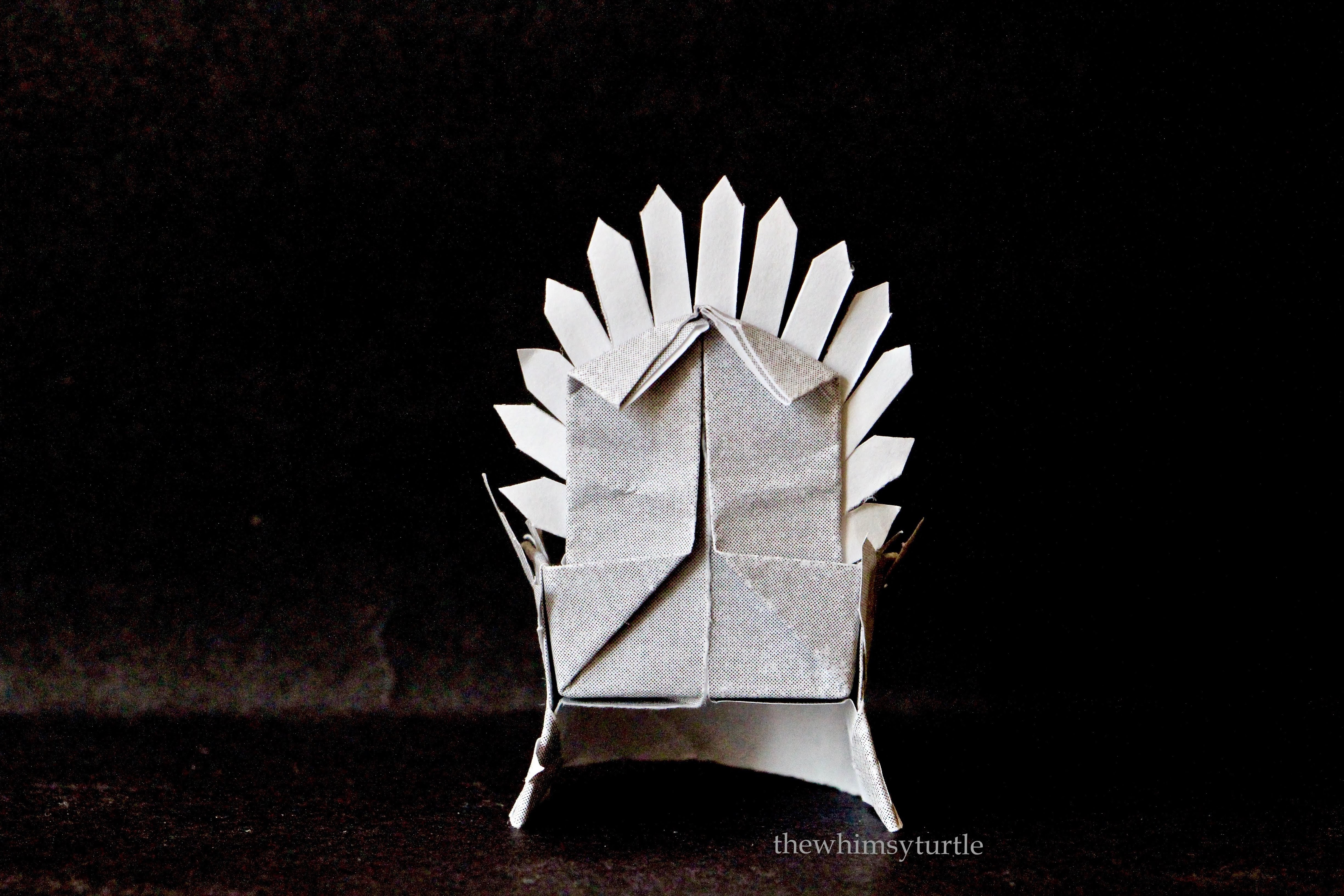 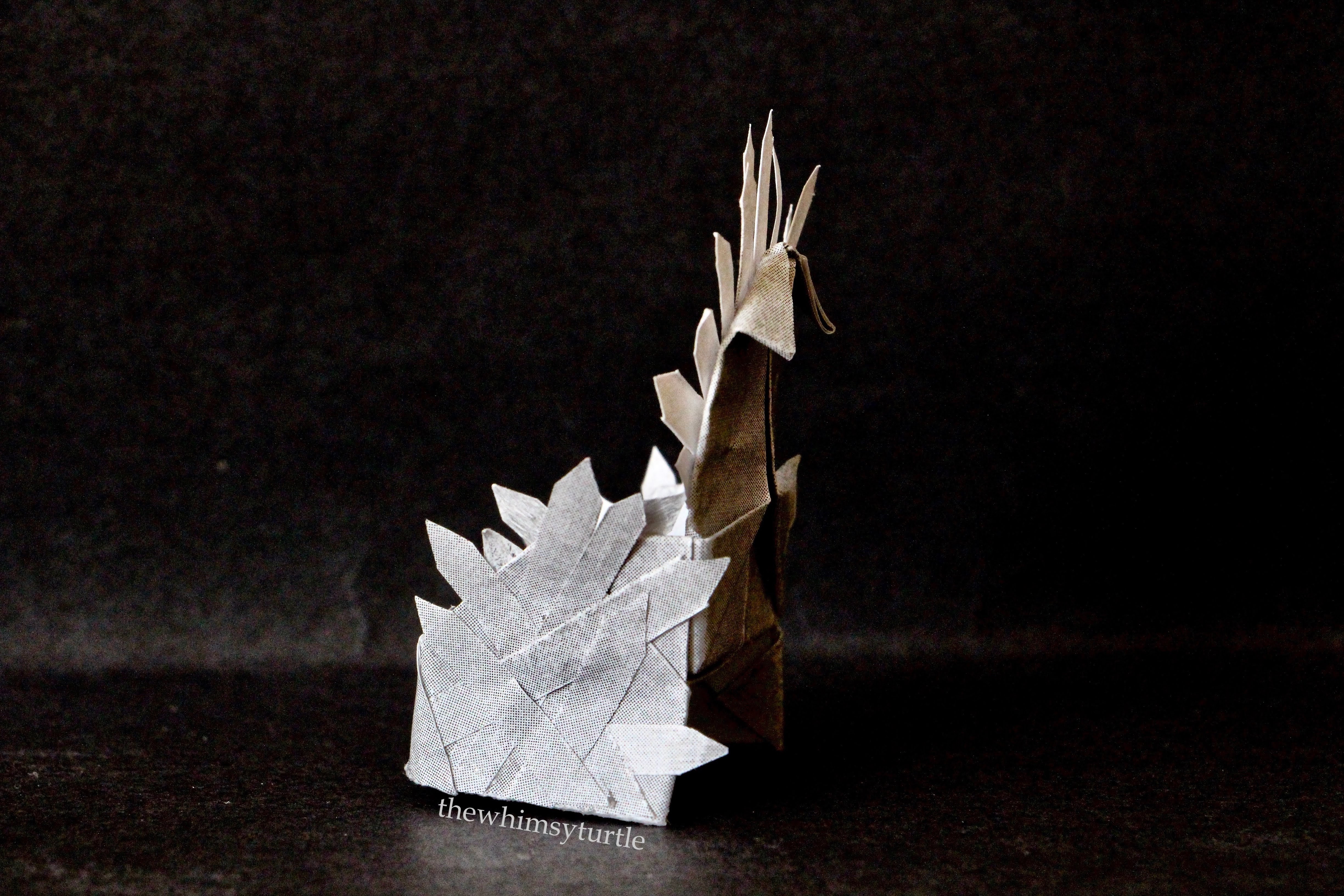 …vs. shaded tips that are indistinguishable from the other swords!

On the whole, I am very proud of how well my mini Iron Throne came out! 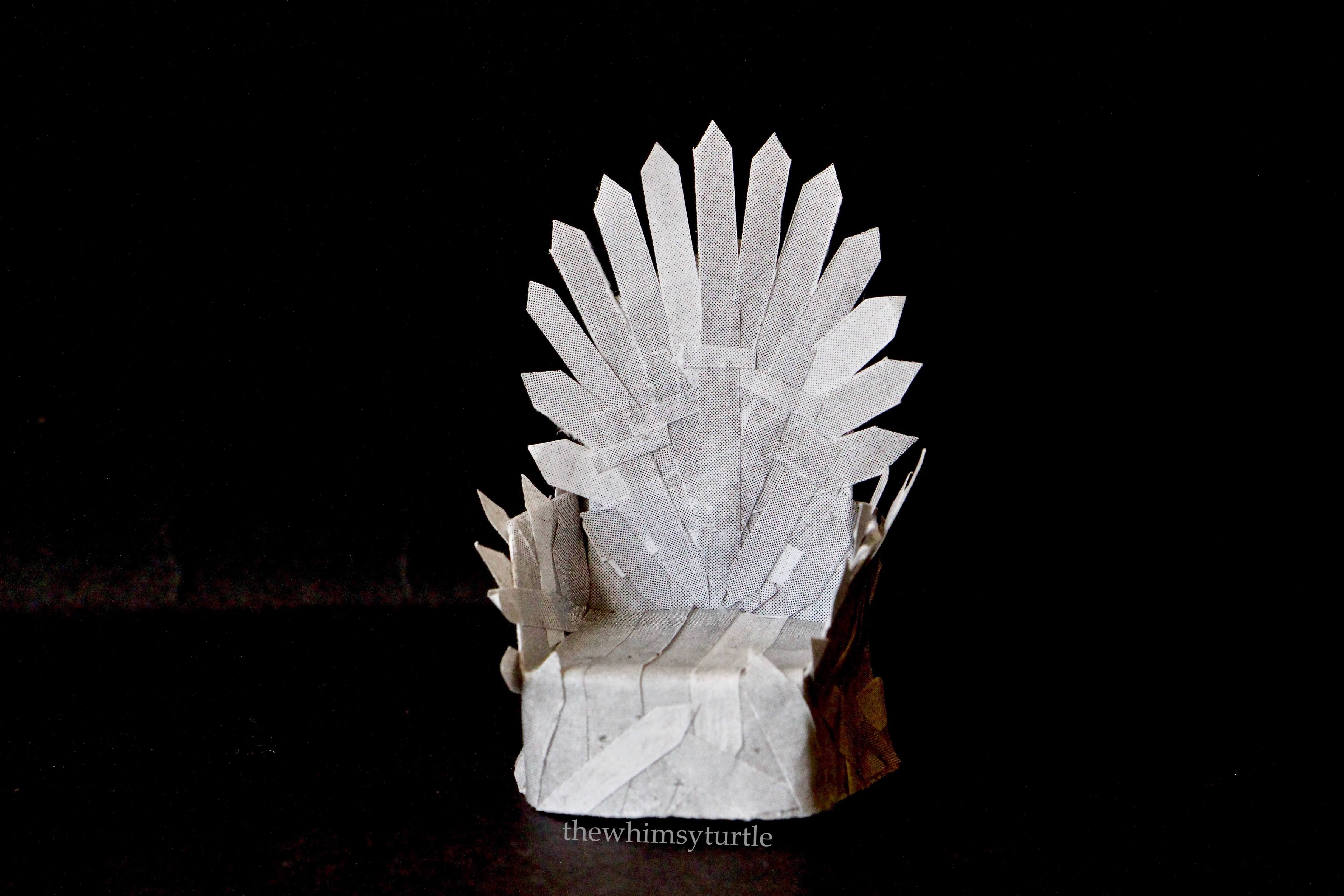 If a paper chair could look smug…

So who thinks everyone is going to die in the final season?

Spoiler alert: King Kirby takes the Iron Throne and noms all of Westeros! 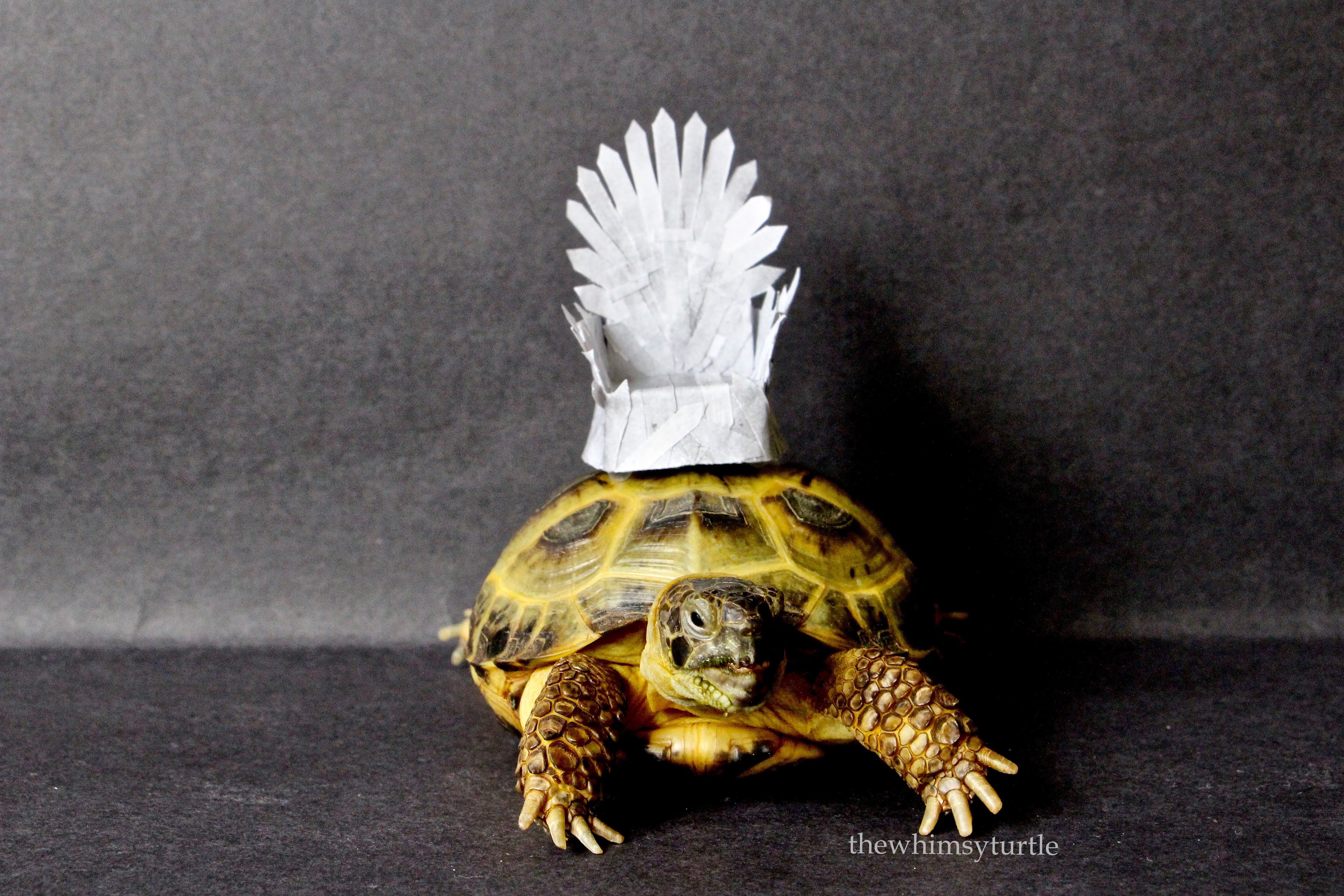 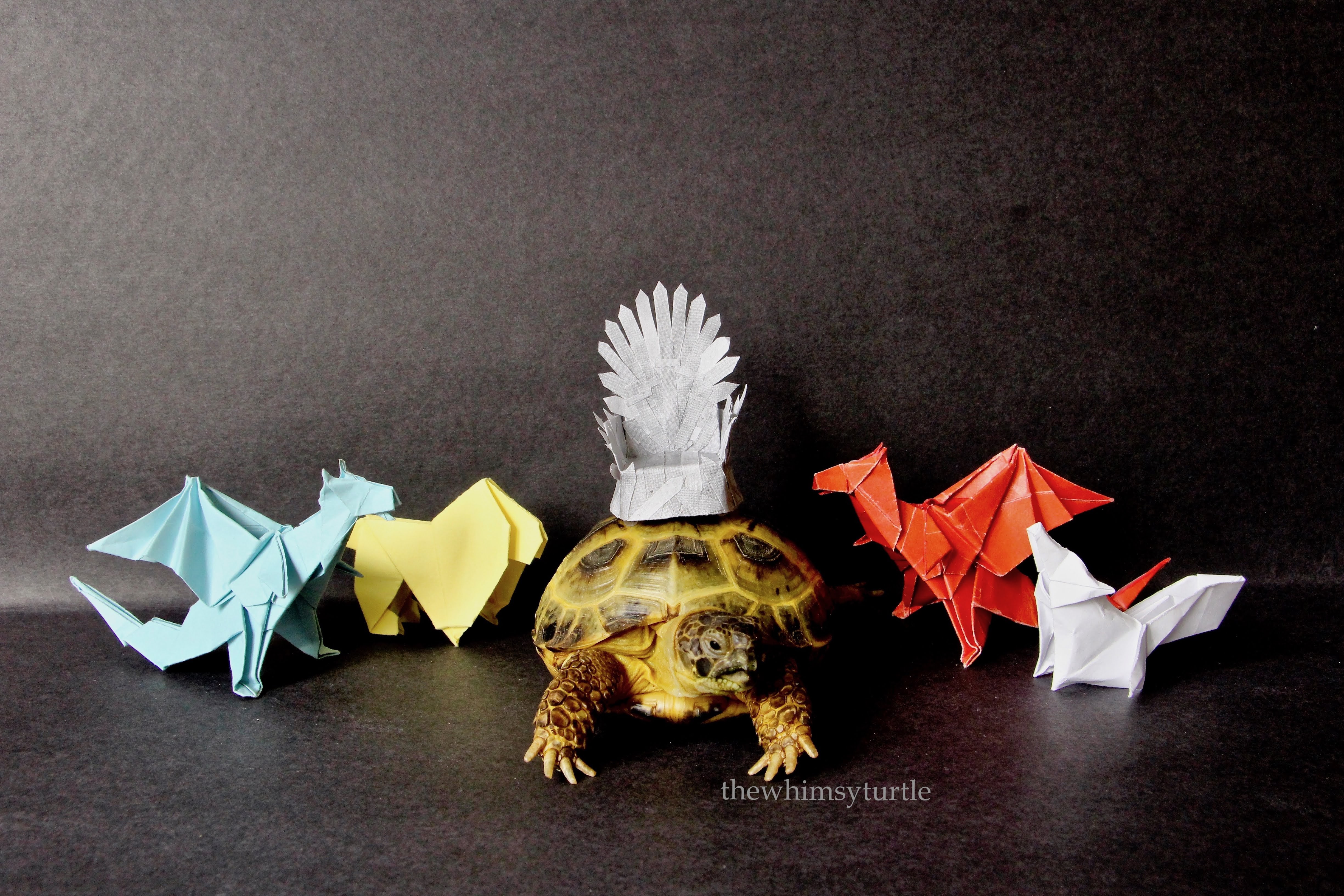 Bend the knee to the Nommer of All and Master of GRUMPs! 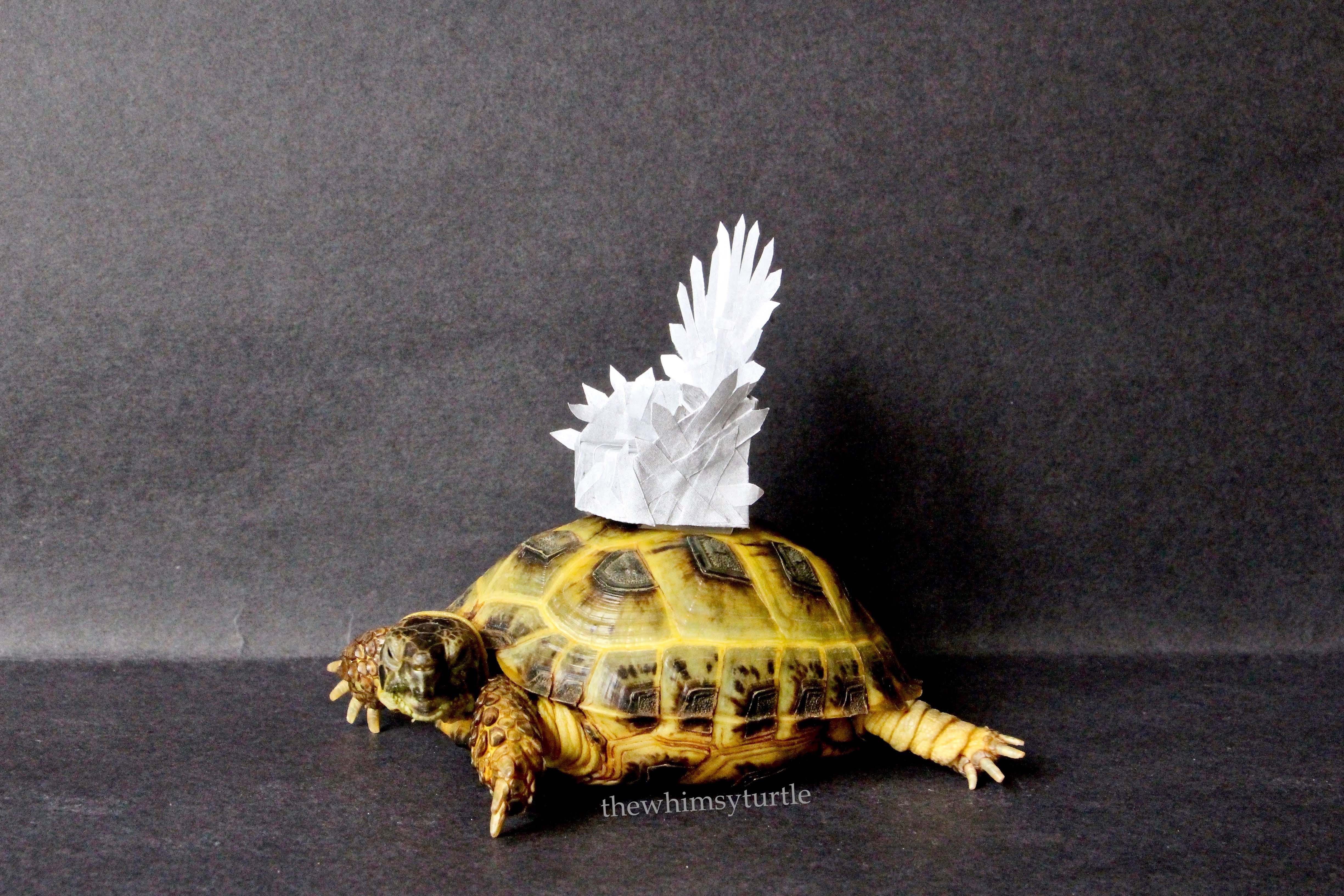 The Iron Throne is MINE! 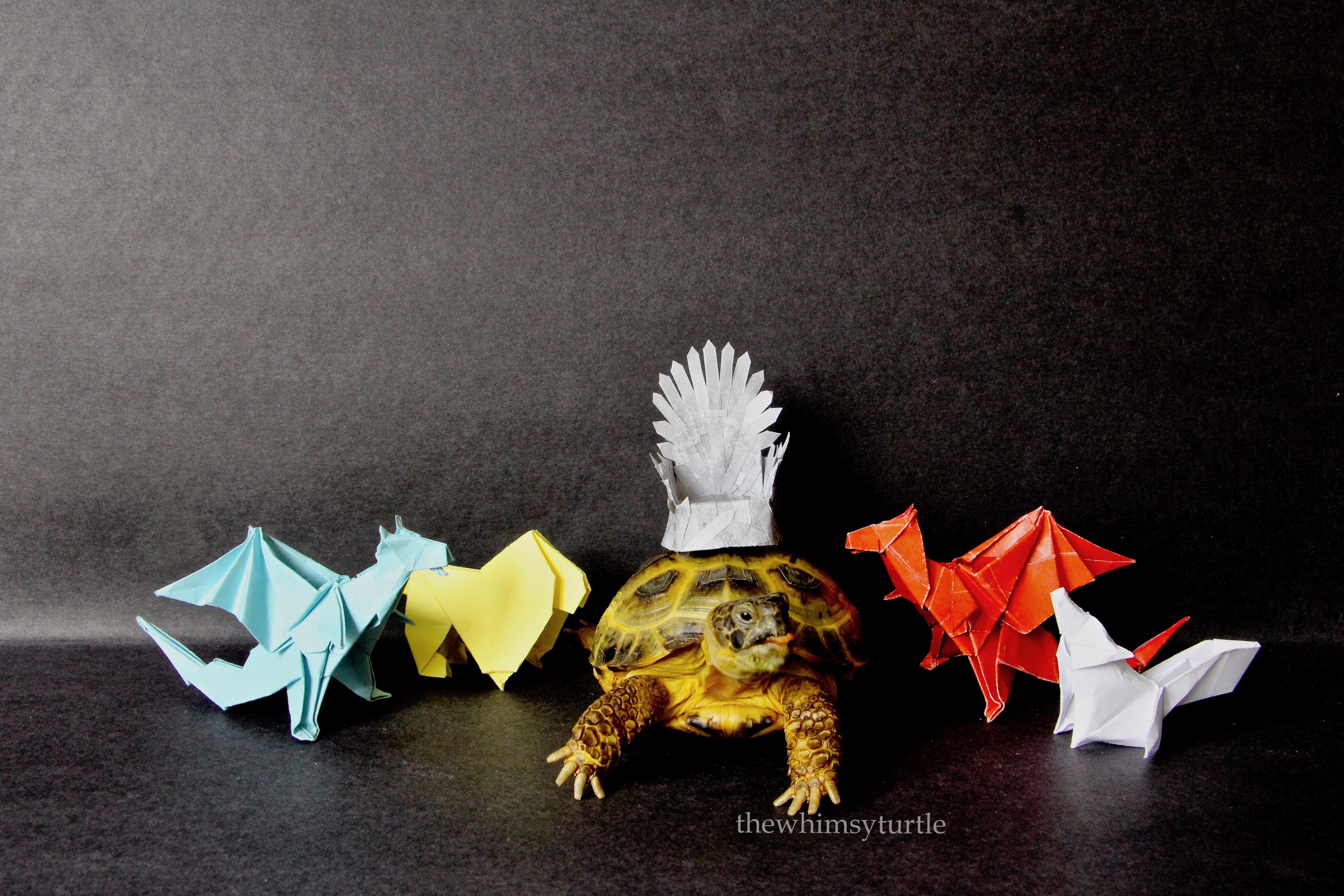 MOAR NOMS FOR THE KING!

Lots more photos of the hungriest Lord of the Seven Nom-doms over on our Tumblr! 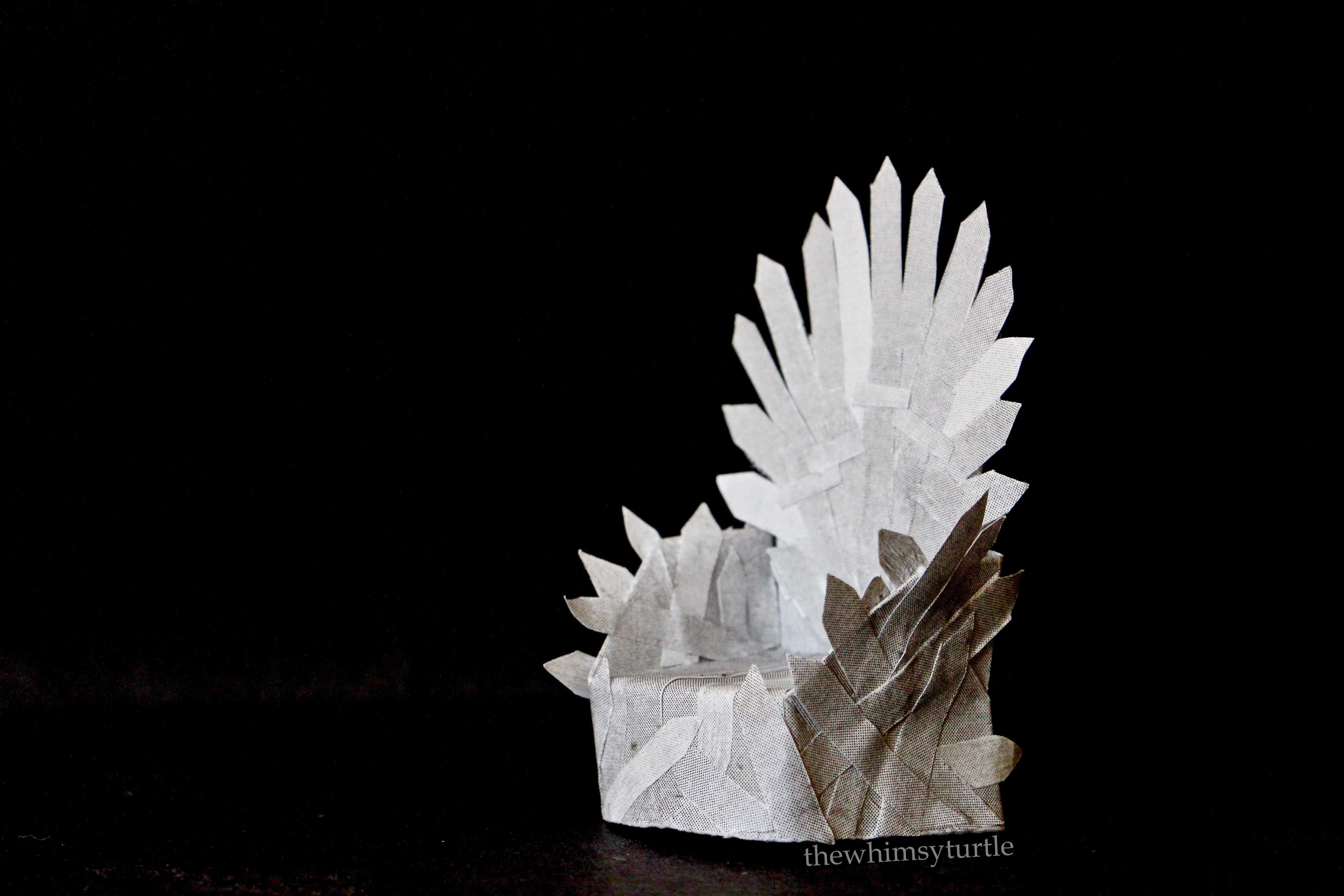 And the most desirable chair in all of Westeros goes to…